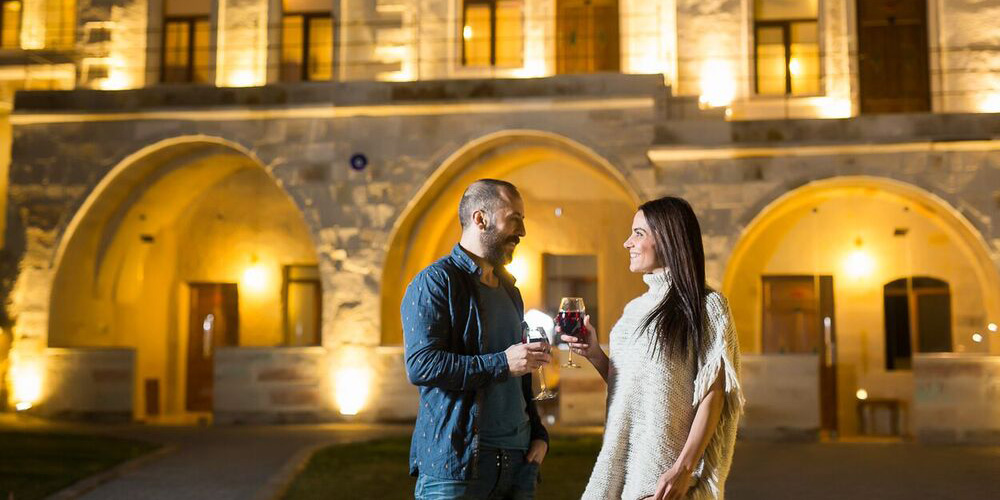 Where is Cappadocia in Turkey?
Cappadocia is a name of a region in the middle of Turkey. Its province is Nevşehir but generally historical and natural sites are in the villages not in the province that is why wide range of hotels are located in the touristic villages and towns of Cappdocia.

Travel to Cappadocia by Bus

Our Hotel is at the central of Cappadocia and 10-12 hours by bus from Istanbul, 8-10 hours from Antalya, and a 5 hour bus ride from Ankara. There are three bus station around us; Nevşehir Bus Station(20 km), Avanos Bus Station(2 km), Göreme Bus Station(3 km). There are a few major bus companies which give service from these cities to Cappadocia. Their names;’’ Metro’’, ‘’Süha’’,’’ Nevşehirliler’’.

Our recommendation is to purchase your ticket directly to Avanos Bus Station or Göreme Bus Station since they are so close to our hotel like 5 minutes driving. When you arrive you may find a taxi around you or just call us to pick you up. If you dont have a mobile phone you may call us from a Tourist Information Office in the bus station we will be over there to pick you up within 10 minutes.

Travel to Cappadocia by Plane

You can fly from major cities of Turkey like İstanbul, Ankara, İzmir, Antalya in an hour or less into either Kayseri Airport (ASR) or Cappadocia (Nevşehir) Airport (NAV) the distance 45-60 minutes by driving to Jacob’s Cave Suites. There are direct flights from İstanbul to Kayseri or Nevşehir Airport everyday operated by Turkish Airlines (from/to Atatürk Airport ) or Pegasus Airlines( from/to Sabiha Gökçen Airport on Asian Side). If you would like we can organise a private transfer or a rugular transfer from/to Kayseri or Nevşehir Airports on demand. In certain days of the week you can find direct flights from/to Kayseri Airport and İzmir Airport  Pegasus and Sun Express companies organising these direct flights.

Travel to Cappadocia by Driving

If you have a car or rentad a car in major cities of Turkey, you may drive via these cities to reach Cappadocia;